I am regularly asked many questions on shotguns and shooting in general, and probably the most common are –

Of course there is no one single answer to these questions and I would need to write a book to even begin to address such a wide and complex subject. There have been and still are, many great makers and many great models. No one could argue against the bar action sidelocks from the best makers such as Holland and Holland, Atkin, Grant and Lang or Purdey,  nor the finest over and unders produced by Boss and Woodward. Close to my heart for number one slot for London gunmakers would also have to be Henry Joseph Hussey described in British Gunmakers by Nigel Brown as ‘an out-and-out rogue’ ! A rogue maybe, but a maker of some of the very highest quality sidelocks.

This is not to forget unusual and innovative designs such as Dickson’s 3- barrel gun and their side opening over and under, modern continental classics from Beretta, Browning, Perazzi etc and stunning workmanship from the likes of America’s Tony Galazan.

However, you the reader will want me to name a gun and maker, and I can safely say that in my opinion James MacNaughton’s skeletal trigger plate, bar-in-wood action,  is the most pleasing to my eye and most delightful to shoot with. MacNaughton named his most famous design “The Edinburgh Gun” and described it in his catalogue thus – “with solid action beautifully curved and rounded, the strongest action made.”

This innovative gunmaker set up in Edinburgh’s George Street in 1864 but by the date of the patent for this masterpiece (1879), he was trading from more upmarket premises in Hanover Street.

This gun preceded the now better known Dickson-Murray design by some three years, with the trigger plate lock used in both guns conceived by MacNaughton himself. His design placed the hammers, sears and mainsprings directly above the trigger blades and used the top lever to both open and cock the action. This allowed for a slimmer and lighter hammerless action to be built compared to previous designs, giving the gun beautiful lines and lovely handling.  All this at a time when most ‘best’ makers were still producing hammer guns. 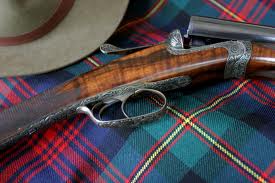 James MacNaughton continued to find success with his guns, taking the gold medal at the Melbourne Exposition of 1881, soon followed by gold at Edinburgh. In 1890 he added ejectors and a more conventional cocking system using the fall of the barrels as pioneered by Anson and Deeley. He also added a swivel safety which was his particular signature feature.

MacNaughton died in 1905 aged 66 and the firm became James MacNaughton and Sons, but without the thrust of its founder it continued on languidly until it was acquired by its old competitor John Dickson & Son in 1948. Production was then more or less discontinued except to replace missing guns from matched pairs.

In 1995 the name, goodwill and records of James MacNaughton was sold by John Dickson & Son Ltd to Alastair Laing (of Dicksons) and Barry Wilcox of Dicksons and formerly of Hendry Ramsay & Wilcox and B E Chaplin (trading as Logie Gunmakers, Forres, Moray), and so I had the good fortune to be instrumental in the renaissance of what authors Ian Crudgington and David Baker have called “one of the most elegant of all handmade guns”

Yes, I may be a little biased, but I am most proud of my association with James MacNaughton. I have personally owned three of these beautiful guns – one I sold to trade up to another- and the other two I sold to finance the weddings of my two daughters (‘greater love hath no man’)!

There maybe is no perfect gun – but this is close!